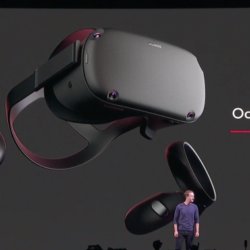 At last weeks Connect 5 event Oculus unveiled their latest edition to the Oculus family called Oculus Quest. Last years announcement was the Oculus Go. It was released this year. Subsequently the Oculus Quest will be release in the spring of 2019. It is more powerful then the Go. More portable then the Oculus Rift. Read more about Oculus Quest shows off Arena Scale gaming[…]